So Glad You're My Friend

This little lady has been hiding in a box for some time. 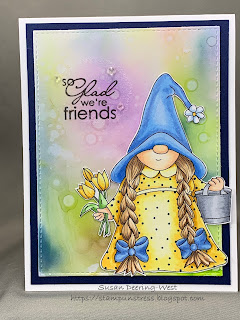 I really need to get better at using what I have right away. She is on one of the alcohol ink backgrounds I made two years ago! I made it on the back of photo paper then cut it with a Stitched Rectangle STAX Die from My Favorite Things Stamps.The image is a KLM Digital Design Gnome colored with Copic markers. The sentiment stamp was an old hostess gift from Stampin'UP! The panel is mounted on a piece of Night of Navy.
I think I'll use it as a thank you note for my friend who just gave me a huge bag of tomatoes from her garden.
Posted by Suzstamps at 3:00 AM 6 comments:

Ah, yesss....There is a decided chill to the air this morning. Perfect for a cup of coffee with a friend.
This image is a KLM Digital Design digital image and sentiment. 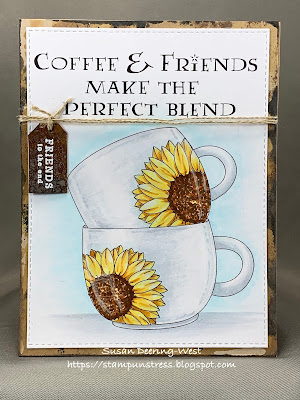 This also comes in a photopolymer stamp set.
I printed the image and the sentiment using my Epson printer on Georgia Pacific 110lb card stock, then colored it with Copic markers. I used a white Prismacolor pencil to add a bit of highlight to the cups.  The panel is cut with a Stitched Rectangle STAX die from My Favorite Things stamps. The background layer and the tag were made using kraft card dipped in Distress Ink and Oxides.
Enjoy the cool weather. And, have a cup with a friend.
Susan
Posted by Suzstamps at 3:00 AM No comments:

I have a series of birthdays coming up soon so I made a few extras, just in case. The first one uses the balloon Gnome from KLM Digital Designs. 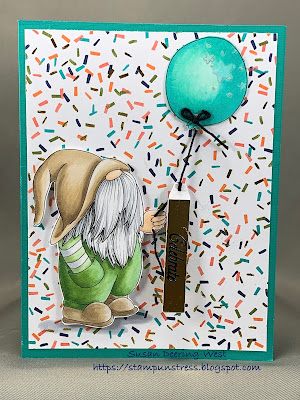 I colored him with copics and fussy cut him. I used a little foam tape to pop him up on an old piece of stash paper. I'm trying to use as much as I can. The card base is from a Craft Smart pad from Michael's. I threaded the balloon with a piece of crochet cotton. I included a loose double sided tab on the string made from some embossed foil paper attached to a piece  of heavy card. One side says Celebrate the other Happy Birthday.
This next card is very simple. 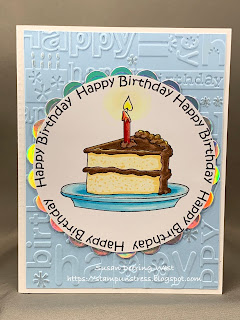 The birthday cake image, as well as the circular birthday wish, are digital images from KLM Designs again. The image was printed with an Epson printer on Georgia Pacific 110lb cardstock then colored with Copic markers. I used a circle die to trace around the sentiment as it was too big to cut with the die but the outer edge was just right, then I fussy cut the circle. I used some holographic cardstock to cut a spellbinder scalloped circle. The circle was layered onto an old piece of embossed paper. I think it is probably Stampin'UP! Bashful Blue. (That's OLD!) The whole thing is attached to a Whisper White card base. I added a little bit of Sakura clear glitter pen here and there.
So, if you are having a birthday soon, have a great day.
Susan
Posted by Suzstamps at 3:00 AM No comments: 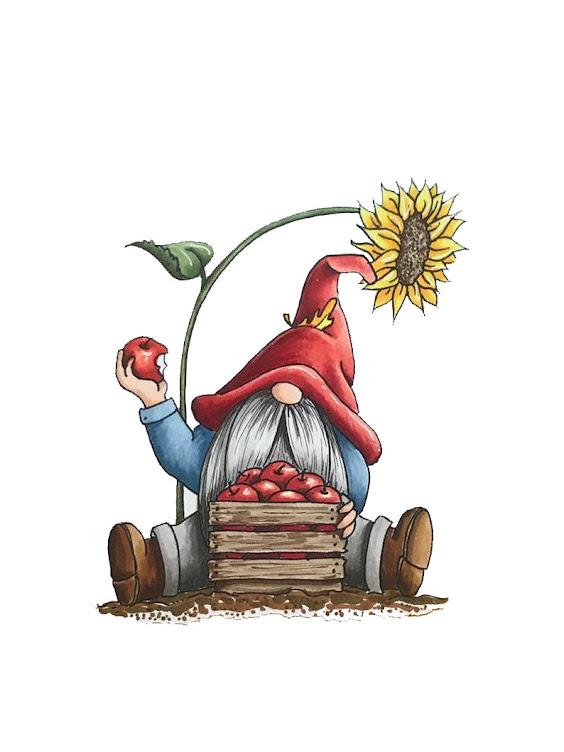